From www.leather-dictionary.com - The Leather Dictionary
(Redirected from Antifriction coatings)
Jump to: navigation, search

Part of the testing and examining process for quality leather involves checking for any creaking and squeaking sounds that may be caused by friction. Such noises can also occur in many other materials, such as rubber, plastics or imitation leather. They are generally the result of surfaces constantly rubbing against each other.

Creaking noises are produced when superimposed layers are alternately adhered to one another within a short time and are then released again. Much depends on the structure of the surfaces that touch or come into contact and also the number of times contact occurs. Surfaces with only a microscopic unevenness can stick together under pressure, resulting in a creaking or squeaking sound. The main influencing factors for this are the pressure at which the surfaces rub against each other, temperature, surface soiling, humidity and material fatigue. 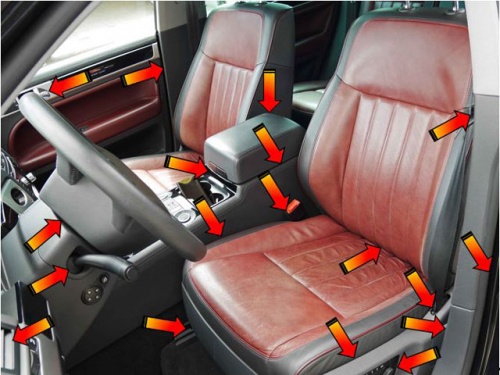 In a vehicle creaking noises can occur everywhere.

A common measuring method is the "Slip-Stick-Test": Under standardised contact pressure, a material sample is rubbed against another. Sensors measure the extent of the sticking by means of the delay in the acceleration.

Anti-friction coatings are designed to reduce or minimise friction on surfaces. They do this by filling microscopic irregularities in the surfaces, which favour the crease effect. Lubricating lacquers are applied as thin, almost invisible films.

To eliminate squeaks, rattles and other disturbing noise, anti-friction coatings are used in the car industry and the furniture industry. But there is also an assortment of products for end users. Disturbing noises aren't just confined to cars - in today's widespread functional furniture industry, with its many adjustment options, undesirable squeaks and creaks are likely to occur.

The use of Antifriction Coatings.