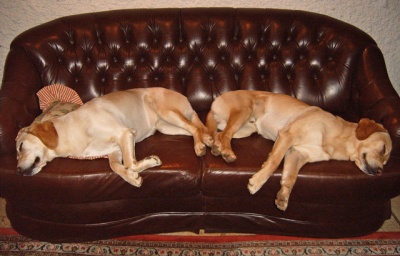 It is forbidden to sell dog fur in many countries. REGULATION (EC) No 1523/2007 and the German Animal Products Trading Act (TierErzHaVerbG), prohibit sales of cat fur and dog fur, as well as products containing such fur in the EU, or from the EU to other destinations. However, transporting them for non-business reasons is permitted.

These regulations relate only to fur of dogs and cats. The hairless leather of dogs and cats is therefore not prohibited. There is no explanation for this. Even teeth, claws or bones are not subject to any prohibition, nor is the hair of the animals without skin.

The consumption of cat meat or dog meat is prohibited in Germany according to § 22 of the Food Hygiene Ordinance.

In the Middle Ages, there were widespread areas of application for dog leather in Europe, which only began to disappear with technical progress.

Dog furs are mostly from the East Asian region. They are labelled as "Gaewolf" (korean gae: the dog), "Wolf of Asia", "Dogue de Chine" or "Asian raccoon" so as not frighten the customer and to avoid the term "dog". Even for professionals, it is difficult to recognise which animal a fur is from.

Dog meat is still a foodstuff in some Asian countries. During preparation for the Olympic Winter Games in South Korea, the sale of dog meat or dogs on markets was forbidden. In parts of China, Vietnam, Thailand and the Philippines, dog food has a long culinary tradition. Overall, this tradition is becoming less important. Around the year 2000, there were still over 1,500 dog food restaurants in Seoul, South Korea. Nowadays, there are significantly fewer restaurants selling dog meat and dogs are now more used as domestic pets.